I took one bite of these brownies and lost consciousness…

In the blackness, my eyes focus upon a dark mountain stacked with rocky chunks of chocolate.  A river of fudge syrup flows through fields of chocolate blossoms, extending as far as I can see.  There is nothing but the pounding of sweet, decadent chocolate coursing through my veins, beckoning me farther and deeper into an entire land filled with chocolate.  Ahhh…the adventures I could have here.  The aroma gives way to pure bliss.  Total relaxation.  Divine *tug*   Mmmm… *tug*     happiness *tug*

Unfortunately, the tugging of my two-year old forced me out of my chocolate stupor and back to my slightly-less- chocolate-filled-life.  I made these brownies last Saturday as a gift for my brother-in-law.  His birthday was this week and he loves Riesens. 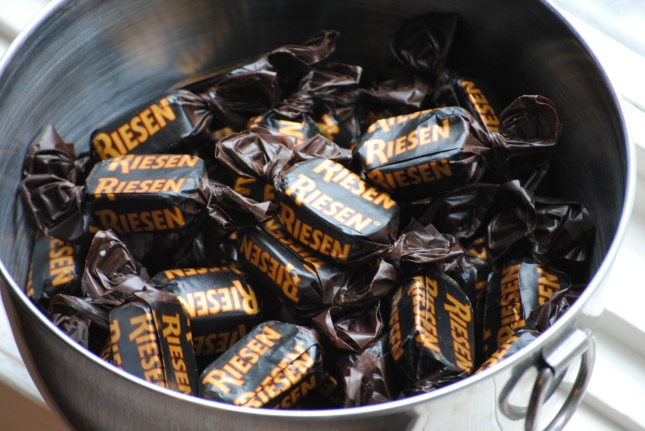 So, I did a little research and found this absolutely delectable recipe which just happened to be graced with not one but two entire packages of Riesens.

The look of sheer pain on my husband’s face when I told him that these brownies were for his brother and that he couldn’t eat any was positively heart breaking.  Luckily, when I packaged them up on Sunday, there were a few left for us to taste (read devour) and I must say they were positively earth-shattering.

I urge you to try them as soon as humanly possible.  In the brownie world, I dare say, they are a game changer.

Preheat oven to 350°, coat a 9×13 inch baking dish with non-stick cooking spray. In a large bowl combine cake mix, butter, and 1/3 cup evaporated milk, stir until dough sticks together, forming a ball. Press half the dough into the baking dish, bake for 6 minutes.In a medium sauce pan over medium heat, melt caramels with remaining 1/3 cup evaporated milk, stir frequently. Remove baking dish from oven. Sprinkle chocolate chips over warm dough. Spread melted Riesen mixture over the chips, then crumble remaining dough over the top. Bake for 20 minutes. Let cool then refrigerate for at least 1 hour before cutting. (or I just let mine sit on the counter to cool.)
Advertisement